For those with type 2 diabetes, you are at a much increased risk for chronic kidney disease. The National Kidney Foundation recently hosted a web chat with actress Debbie Allen where the focus was on raising awareness for those at risk, especially those who are either diagnosed with type 2 diabetes or prediabetic.

As one participant pointed out, most people aren’t aware of the dangers of kidney disease until they are diagnosed with it. This is something that needs to change if we are to save people from what is often a very preventable form of the disease in type 2 diabetes. Much of the advice here applies to those who aren’t diabetic, have another form of kidney disease, or are a perfect picture of health.

This is something you can (and should) get out ahead of!

Here is the link to the kidney quiz site they reference in the chat:

Tune in on Wednesday 12/9/2020 at 7:30 AM Est on Lifetime channel for the Beyond The Mystery segment of The Balancing Act. Beyond The Mystery is segment they do on rare and genetic diseases and for this one they will include a focus on IgA Nephropathy.

I’ll admit I’m new to this program and hadn’t heard of it before it was posted to the IgAN Foundation’s Facebook group, but now I’m interested in seeing what they do going forward.

Be sure to check it out!

Edit: I originally posted that this would be on at 7:30 PM which was wrong. This will be 7:30 AM. It’s a morning show. I need to make sure I’m fully awake when posting these things. Sorry for any confusion.

The episode has aired and the IgA Nephropathy Foundation Of America has the segment (just under 10 minutes) on their Youtube channel. I recommend checking out the video (linked below) and the rest of the videos they have on their channel.

Below is a link to an episode of The New Normal (an online documentary series). This roughly five minute episode takes a look at how the emergence of Covid-19 has impacted those on dialysis. Unlike patients with some other conditions, patients in kidney failure don’t have the option to stay home and put off dialysis treatment, even in the face of a pandemic.

This informative piece does a good job showcasing the physical and emotional toll this takes not only on the patients, but also the caregivers and the risk their loved ones take on as part of the process. It’s a short episode but worth checking out:

Be on the lookout for B Positive, a new sitcom appearing on CBS. You can catch it on Thursday nights at 8:30. This show centers on a newly divorced man who is suddenly and unexpectedly diagnosed with kidney disease. He then gets an offer of a kidney donation from an unlikely source after reconnecting with an old friend.

This series is unique in that the plot focuses largely around a man’s journey with chronic kidney disease, something not well represented today in pop culture. I hope it helps shine a light on a disease that silently affects millions of people.

I just finished watching the pilot episode. Since I don’t watch a ton of sitcoms these days it’s hard for me to really give it a good assessment. That being said, as a pure comedy, it’s not exactly Seinfeld, but I do think the characters will grow on us over time. I’m already finding myself instinctively nitpicking how some of the diagnosis and treatment aspects are depicted, but I’m also realistic enough to know that a 30 minute sitcom will need to take some liberties at times with some of he technical aspects of CKD treatment. With that understanding, what I’ve seen so far is actually quite well done.

I encourage people to check it out and spread the word. Let me know what you think in the comments below!

In my previous article What I Did On My Summer Vacation I highlighted some of my experiences so far with my involvement in a clinical trial to treat IgA Nephropathy. Clinical trials will be a theme I come back to often going forward as I can’t stress enough the importance of volunteering for them if you are able. It’s the only way to get the necessary treatments into the marketplace.

I saw the following link posted on social media and thought I’d share it here. If the reports are legit, this is another drug that has serious potential to reduce proteinuria. As of this writing it is currently in phase 2. There is real momentum out there that as patients we need to stay on top of!

If you are following the developments of the Covid-19 virus as most people are at this point,  you know that a lot of information is flying towards us at a pretty fast pace right now. Things are a little confusing and very much out of the ordinary. If you are a kidney disease patient with autoimmune concerns, this is especially true.

Below is a short video that was posted on Youtube by Nephcure Kidney International with some general advice for kidney patients (a lot of this applies to everyone really) on how to avoid the virus as much as possible and what to do if you feel you may be getting sick.

It’s a short video and worth checking out.

If you are like a lot of people there’s a chance you’ve never heard of Nephrotic Syndrome. It’s also possible you are now reading this because you’ve only recently been diagnosed or have a loved one who been diagnosed with this condition. I know I’m still trying to sort out not just the different diseases that result in NS, but why they are such a common cause of kidney failure. There’s a lot to learn here.

This video, a webinar from 2017 hosted by Nephcure Kidney International is a great introduction to NS by Dr. Mindy Banks. It runs for just under an hour and I recommend carving out some time watch her presentation as she does a good job of covering a lot of ground not just for relative newcomers like myself, but she also answers some questions for patients and parents who have already been struggling with this condition.

Are you new to Nephrotic Syndrome? How has it impacted your life? 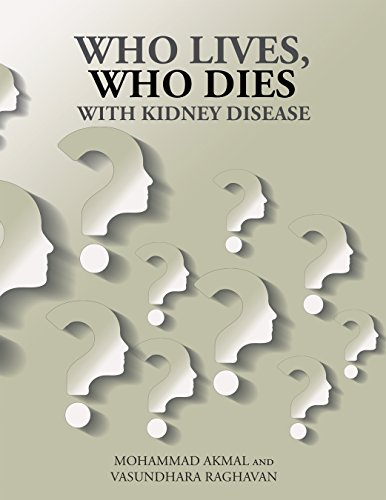 So a couple months after my diagnosis after nearly exhausting my web searches for kidney disease, I finally remembered to branch out and being something of an avid reader decided to track down some Kidney Disease themed books. To my surprise and disappointment, there isn’t a whole lot out there.

One of the books I did find I decided to take a chance on. It’s titled Who Lives and Who Dies With Kidney Disease by Mohammad Akmal and Vasundhara Raghavan.

END_OF_DOCUMENT_TOKEN_TO_BE_REPLACED

This is a great animation I found on Youtube that details how a kidney transplant is performed. While a lot of the jargon is over my head, it’s fascinating how they pull this off and the care involved. I never thought I’d be so fascinated watching veins get sewn together but it really is amazing how they do this.

It’s not a long video, so it’s a good seven minutes well invested.

This is a recent talk at the University of Leicester in the UK. It is a good basic overview of how transplantation is done in general and also adds some interesting IgAN specific information at the end regarding whether or not it comes back post-transplant which is of great interest to me. It’s not too long so give it a look!